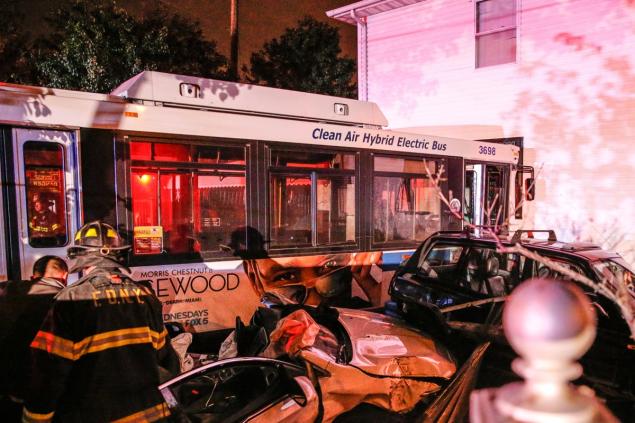 Authorities on Sunday arrested a man who allegedly started a chain of events that caused an Metropolitan Transportation Authority bus to crash into a home, police said.

Chevon Parchment, 24 years old, from Elmont, was fleeing from police when he smashed his car into a bus, causing it to careen into several parked cars and a home on Meadow Road in Springfield Gardens on Saturday night, police said.

Mr. Parchment had been spotted without his seatbelt by officers while he drove along Rockaway Boulevard at about 9:40 p.m., authorities said. The officers attempted to stop Mr. Parchment but he took off, police said.

The Q113 bus had 10 passengers on board, police said. The riders suffered minor injuries and were taken to local hospitals, officials said.

Shortly after Mr. Parchment was taken into custody, investigators found 64 ziplock bags of crack cocaine inside the vehicle, police said.

He faces charges including criminal possession of a controlled substance and reckless endangerment, police said. It was unclear if he had an attorney.