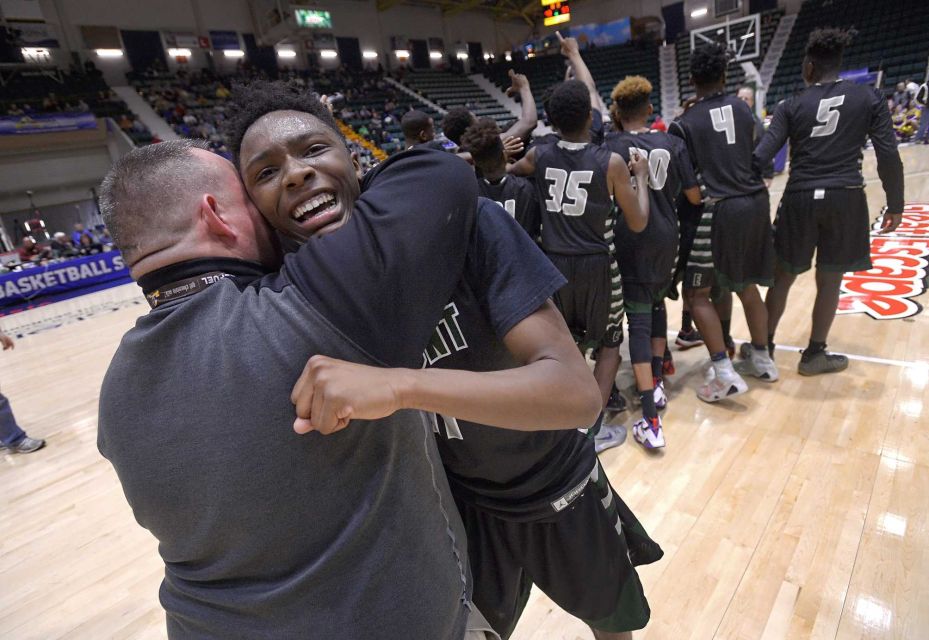 Elmont’s players and coaches were at the arena early Saturday, paying close attention to the 9 a.m. semifinal game between Williamsville South and Troy, possible opponents in the final if the Spartans won their own semifinal game later that morning. They did, and class was in session.

“We call it going to school on a team,” Elmont coach George Holub said.

Give Elmont straight A’s and move the Spartans to the head of the class. Class A, that is. Elmont schooled Troy in the subjects of defense and rebounding and won its first boys basketball state championship with a 57-43 victory Sunday at Glens Falls Civic Center.

“We talked about what they do and what we would do,” Holub said. “Right away in the first quarter, you could see our kids picked it up.”

Elmont (23-3) cut off the passing lanes, put on another of its signature defensive clinics and attacked the glass ferociously despite the presence of Troy’s 6-11 Jack McLaren.

“We realized what they were trying to do,” Elmont guard Travis Robinson-Morgan said. He scored 15 points, including six straight in the fourth quarter to help the Spartans pull away, and made four of the team’s 10 steals as Elmont forced a staggering 23 turnovers.

“We talked about it all night in the hotel,’’ Robinson-Morgan said. “It was hands into the passing lanes and key on him [Mc Laren].”

McLaren scored 13 points and grabbed nine rebounds, but he was outmanned and neutralized by Elmont’s frontcourt of K.C. Ndefo (10 points, 13 rebounds) and Jalen Burgess (19 points, six rebounds), plus another 15 rebounds from its guards. Elmont’s rebounding edge was 36-25.

“We have a saying about rebounding,” said Burgess, who made eight of 16 field-goal attempts and was voted MVP of the Final Four. “It’s heart over height.”

Elmont’s historic journey will continue with next week’s Federation tournament in Albany. That means more opportunities for some feisty practice sessions during the intense defensive drills.

“We fight every day,” Robinson-Morgan said. “That’s how hard we work on defense. But we love each other.”

Noted Ndefo, who had four steals and two blocks, “We’re always fighting, but we’re a family and we protect each other.”

In a semifinal victory over Byram Hills, Ndefo protected the back line with seven blocks. On Sunday, his guards offered protection out front in the 2-3 zone with the many steals and deflected passes. “If you stick to the game plan, you can accomplish anything,” Holub said.

They shared in Sunday’s accomplishment. Burgess scored 11 points in the first half and Ndefo grabbed eight rebounds as the Spartans grabbed a 29-24 lead at the break. Troy crept to within 39-35 in the last two minutes of the third quarter, but Ndefo rose for a spectacular one-hand follow slam and a baseline jumper, and Yasir Lawrence hit a turnaround just before the buzzer for a 43-35 lead.

Eight minutes from a state championship, Elmont could taste it. Robinson-Morgan, however, had a different taste in his mouth at halftime. He got sick to his stomach and did not start the third quarter. But he was blazing in the fourth quarter when he hit a teardrop floater, a layup after an open-court steal and a lefthanded layup.

“I ate too many pancakes and sausages at breakfast,” Robinson-Morgan said. “But once it all came up, I was ready to go. A lot of people doubted us and overlooked us. But we realized this was a business trip.”

The Spartans took care of business and surprised even themselves. “MVP of the state tournament,” Burgess said with a sense of wonderment. “It’s unreal. I never thought it would happen.”