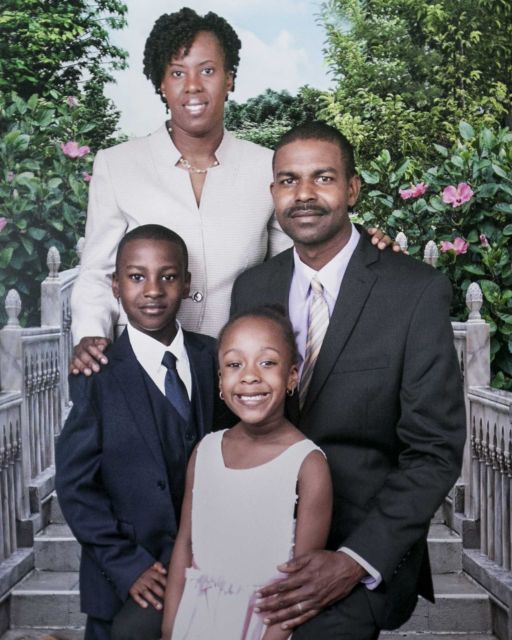 A Queens mother — sobbing and leaning on family members — Sunday mourned her two young children and husband hours after they were killed in a fiery Southern State Parkway crash police said was caused by an alleged drunken driver who fled the scene.

She and her husband, Ancio Ostane, 37, had strapped Andy, 8, and Sephora, 4, into the back of their 2005 Toyota, ready to make the 35-mile journey to their St. Albans home after an evening at a friend’s barbecue in Central Islip that ended in prayer.

As they traveled west on the parkway about 1:30 a.m., the family’s car was rear-ended by Oneil Sharpe Jr., 24, of Springfield Gardens, Queens, who was driving a 2008 BMW sport utility vehicle, police said.

Skid marks on the pavement at Exit 41S near Robert Moses Causeway show a path from the left lane in the express route, going over a grassy median, into the right lane of the local lanes where the Toyota came to a halt. The SUV was abandoned at the scene, police said.

Bouaz-Ostane said she remembers everything about the crash.

She recalled the impact. She remembered noticing blood on her shirt that she believed to be her husband’s. She said she got out of the front passenger door and tried to open the back door for her daughter. But it was locked.

“I was trying to get back in. I didn’t think it was so severe,” she said of the impact.

She didn’t talk about what else she remembered.

The car burst into flames with her husband and two children inside. They were pronounced dead at the scene.

Bouaz-Ostane, a blood bank technician at Interfaith Medical Center in Brooklyn and Brooklyn Hospital Center, said she was not injured. She was taken to Southside Hospital in Bay Shore after the crash and released.

Motorists who had stopped at the crash site took cellphone images of Sharpe’s license plate, Bouaz-Ostane said. She thanked those who tried to help.

Sharpe was arrested hours after the crash at what police said was the home of the BMW’s registered owner in Rockville Centre. Police said they are investigating whether Sharpe left the crash scene on foot or in another vehicle.

People who answered the door at the Rockville Centre house said they did not know Sharpe or the BMW’s owner.

Sharpe was charged with driving while intoxicated and leaving the scene of an accident. He is to be arraigned Monday morning at Suffolk County District Court in Central Islip.

Several relatives of Sharpe reached by phone declined to talk. One woman, who identified herself only as his grandmother, said it wasn’t his typical behavior to drive under the influence.

“All I know is he went out with his friends. I can’t tell you what happened, I wasn’t there,” she said. “All I know was there was an accident.”

Shortly after 5 p.m. Sunday, Sharpe, wearing purple and gold basketball shorts, was taken from the State Police barracks in Brentwood to Suffolk County’s Third Precinct station house in Bay Shore to be held pending arraignment. He used a black Nike jacket to shield his face.

After the crash, Bouaz-Ostane went home. She met with family and friends and talked of the basic milestones her children will never reach.

The husband she lost, a Haitian immigrant who taught mathematics at Medgar Evers College in Brooklyn and at a Brooklyn high school, was a humble man and a great father, she said.

“He cleaned the house so I can be happy when I come home from work,” she recalled of this past Friday, when he also brought her flowers.

Neighbors on 115th Road, a street of two-story detached homes with neatly trimmed front lawns and small backyards, came by to offer condolences to the family and grieve themselves.

“They were a very funny, happy family,” said Sonia Michel, a close family friend. “The children are full of energy, full of life. It’s a family of strong faith.”

Andy, who just celebrated his first Communion in May, and Sephora were remembered for the simple things: Andy’s love of the movie “Cars” and its main character, Lightning McQueen, and drawing; Sephora’s love of ballet and basketball. The two enjoyed riding their scooters together.

Bouaz-Ostane’s sister, Nicaise Bouaz, 43, remembered cutting her niece’s hair a few weeks ago, when Sephora said, “Take my picture. Send that to mommy.”

Bouaz was in Rhode Island when her sister called with the news. She immediately drove to Queens.

“Oh my God,” she cried Sunday. “My niece, nephew and brother-in-law are dead.”