There are not one, but two signs welcoming motorists to Nassau County as the border is crossed east of the Cross Island Parkway. There are, of course, no such signs welcoming visitors to New York City or Queens as you are going west.

Just past the city line, Hempstead Turnpike passes Belmont Park Racetrack, which captures the public imagination every June as it hosts the third leg, and lengthiest, of the three Triple Crown thoroughbred horse races, the Belmont Stakes. The racetrack was built in 1905 with funds raised by financier and German immigrant August Belmont Senior (1813-1890). Belmont’s son, August Jr., also an avid sportsman, founded the Interborough Rapid Transit Company (IRT) in 1902, which built NYC’s first subway. The Belmont Stakes race actually originated in the Bronx in 1867, where it was run at Jerome Park Racetrack, owned by Leonard Jerome for whom the Bronx’ Jerome Avenue was named, the grandfather of Britain’s World War II prime minister Winston Churchill.
The last Triple Crown winner, as of 2011, was Affirmed in 1978.

This is the heart of Elmont, which was originally Foster’s Meadow, named for its colonial-era masters, Christopher and Thomas Foster ,who were granted a tract in western Hempstead in the 1640s. Through the decades, Foster’s Meadow supported the revolutionary cause (Hempstead was Tory), angering the British enough to burn down the community church. Foster’s Meadow, which became Elmont in 1882 (possibly for a preponderance of elm trees) remained mostly farms and fields until the coming of Belmont Raceway in 1905, which prompted a street layout and tract housing for track workers. Among Elmont’s recent bright lights is NFL quarterback Vinny Testaverde, who led the New York Jets to the AFC Conference title game in 1998. 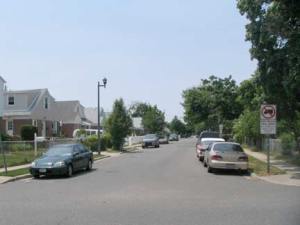 106th Avenue ends at Fieldmere Street. It is one of two numbered Queens avenues that sneak into Elmont, the other being 109th Avenue. 106th Avenue is relatively rare in Queens, running for a block in Ozone Park, a few blocks in Jamaica, and a few more blocks in Bellaire. 109th, which also ends at Fieldmere, is more consistent as a main route in Ozone Park and then Jamaica and Hollis. 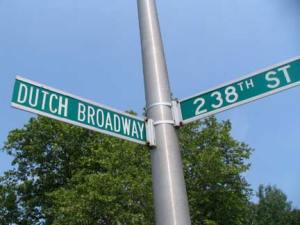 Dutch Broadway is the eastern continuation of 115th Avenue in Elmont and besides Hempstead Turnpike, its other chief through roadway. It continues east to Franklin Avenue in Valley Stream. 237th to 240th Streets, from the Queens street numbering system, run north to south.

Re-entering Queens via 115th Avenue, we enter Cambria Heights, a neighborhood featuring both an African-American population and Caribbean population. It can match Elmont in its frequency of well-kept homes and lawns.
Cambria Heights was developed after 1925 by a real estate agent named Oliver B. LaFreniere. Origin stories of the name Cambria vary, but there was a coal supplier in Cambria County, Pennsylvania (Philadelphia has a Cambria Street) and the county’s Cambria Title Savings and Trust Company, which may have funded early home construction here. There could also be a Welsh connection, as Cambria is the Latinization of the native name Cymru.
Though African and Caribbean Americans predominate here at present, Cambria Heights was primarily Italian, Irish and German into the early 1960s; cross burnings and rock throwing ensued when the first blacks moved in, and white flight followed inital hostilities, as with much of southern Queens. It was war fought on a small scale. 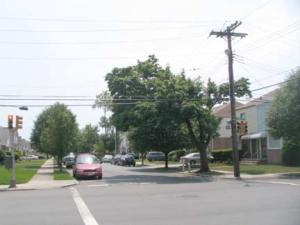 Central Cambria Heights’ major east-west artery is Linden Boulevard; when I first discovered that several decades ago, I was fascinated by the fact that this is the same Linden Boulevard that begins in downtown Flatbush. Initially called Linden Avenue in Brooklyn, the road was gradually extended east, taking over other streets such as Vienna Avenue in Brooklyn and Central Avenue in St. Albans, Cambria Heights and Elmont.
Even today, Linden Boulevard remains unfinished with no prospect of completion; there are bits and pieces that go nowhere in Ozone Park, and mid-20th century maps show it roaring through the northern edge of the Aqueduct Raceway grounds, that part was never built. Its busiest section is between Kings Highway and the Belt Parkway, where it becomes a surface arterial. It is a busy street, though sleepier, in Queens. 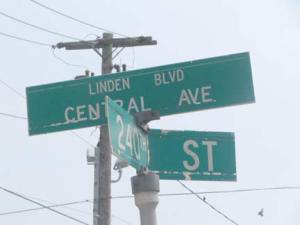 These 1909 maps show Central Avenue, now Linden Boulevard, running alone through what is now Cambria Heights, and Central Avenue, shown by the curving gray line, running south in Elmont and Valley Stream. Central Avenue continues to take that path, which has not been straightened. 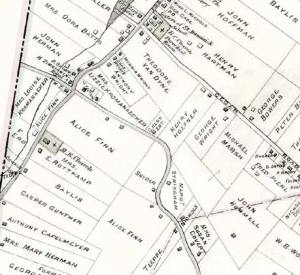 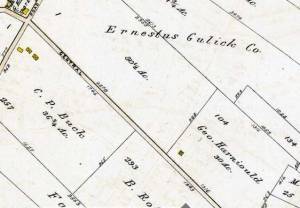 The brick office building, post office and residential building (dated 1941 or 1947) at Linden Blvd. and Elmont Road is unusual in a neighborhood full of frame buildings.